Prompted by this excellent post by Andrew (thank you!), I read Virginia Woolf’s The Waves.

The book navigates a succession of inner thoughts, feelings, states of mind in six disparate characters described with empathic but also stark accuracy, sometimes using mental images that may seem unrelated to a situation, but which provide such a precise description of it. Virginia Woolf has a way with words, but also a merciless eye that sees all the dark corners inside.

The Waves follows these characters from the exultance of youth, through the doubts and changes of midlife, and to the acceptance of the unavoidable end. Once again, I had the feeling that all six characters formed a unified entity, a ‘life’.

And now I ask, ‘Who am I?’ I have been talking of Bernard, Neville, Jinny, Susan, Rhoda and Louis. Am I all of them? Am I one and distinct? I do not know.
[…] we are divided; we are not here.
Yet I cannot find any obstacle separating us. There is no division between me and them. As I talked I felt ‘I am you’. This difference we make so much of, this identity we so feverishly cherish, was overcome.

I see these other forms of me, dancing, apparently aimless, unknowingly aimless. The shouters, the idle, the impatient, the lovers on the riverbank, all the other ‘mes’ that have an existence of their own. But not in the way I see them; in this way, they only exist in me. For me.

And I dance with the others. I dance and dance in this endless spinning top that balances each other out, that unites us. Nature swallows us whole and spits us to dance again around the fire.

And one can almost hear Nature saying ‘You all exist in me. You dance, you sway, you cry, you ‘decide’. You gather, you build, you defend from me. As if you were not me. As if you were separate from me’. To flow with Nature. Or to appease it.

I don’t think I would have liked this book when I was young. I needed a sort of emotional memory to empathise with the characters, to feel what they felt, to be them.

But I, pausing, looked at the tree, and as I looked in autumn at the fiery and yellow branches, some sediment formed; I formed; a drop fell; I fell—that is, from some completed experience I had emerged.
[…] because the whole of life, its masters, its adventurers, then appeared in long ranks of magnificent human beings behind me; and I was the inheritor; I, the continuer; I, the person miraculously appointed to carry it on.

I like reading books. Books allow you to linger, they wait for you until that sentence has sunk. Some films just drag you, mercilessly, quickly, before you can see them naked in their irrelevance.

This particular book rocks you, bringing you to a floating state of mind in which you see things with a degree of clarity. It’s not enlightenment, but a certain knowledge of old age, an understanding. Or rather, an acceptance. It’s them, those characters, but it is us. It is us laying there bare, naked, with some shame and also some pride. We recognise our comrades and see ourselves in them.

After Bernard’s long and final conversation with a stranger, I thought what else can be said about the human life?

So the landscape returned to me; so I saw fields rolling in waves of colour beneath me, but now with this difference; I saw but was not seen. I walked unshadowed; I came unheralded. From me had dropped the old cloak, the old response; the hollowed hand that beats back sounds. Thin as a ghost, leaving no trace where I trod, perceiving merely, I walked alone in a new world, never trodden […]
But for a moment I had sat on the turf somewhere high above the flow of the sea and the sound of the woods, had seen the house, the garden, and the waves breaking. The old nurse who turns the pages of the picture-book had stopped and had said, ‘Look. This is the truth’.

4 replies to The space we take 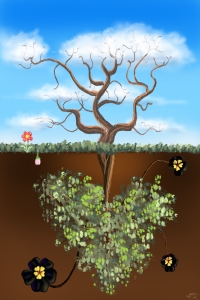